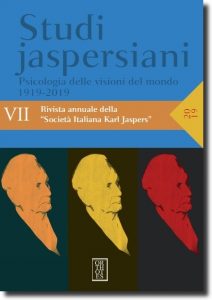 In 1919 Karl Jaspers published the first edition of Psychology of Worldviews. This is a long and difficult text, which suffers from being a work of passage from psychopathology to psychology, and from there to philosophy. Although it was received with great interest at the time of its publication, it was long one of the most neglected texts of Jaspers’ entire production. One hundred years later, the Rivista di Studi Jaspersiani has therefore decided to devote a monographic issue to this work, addressing it with historical awareness, with the aim of revealing its potential to the contemporary debate.

In the Psychology of Worldviews, Jaspers proposes an analysis of worldviews on the basis of the growing importance they had taken from Kant to Dilthey, and reflects on the theme of intuition as a form of knowledge, one that cannot be ascribed to classical cognitive categories. For the young psychologist, a Weltanschauung responds to the subject’s need to relate to the phenomena of knowledge not through an analytical procedure, but by responding to the need for totality, using intuition itself. Jaspers thus lays the foundations for his subsequent reflection on the philosophy of existence, which will lead him to reformulate the idea of knowledge and philosophy precisely from questioning the limits of positive knowledge (necessary but not sufficient) in the understanding of man as Existenz. This work is therefore the result of Jaspers’ ability to grasp, with the hermeneutic finesse of a psychologist, the great thematic cores of thought, reworking and giving new life to traditional concepts and categories. In spite of its magmatic form, the Psychology of Worldviews thus appears as an extremely rich and fertile work, anticipating many of Jaspers’ more mature ideas while making use of the many notions acquired by the young psychopathologist in the philosophical and scientific landscape at the turn of the 19th and 20th centuries.

The essays collected in this volume discuss the essential themes underlying Jaspers’ reflection on worldviews following two senses: the legacy that Jaspers drew on and the legacy that he left behind. The scholars who have contributed to this volume retrace Jaspers’ philosophy, showing, from different but convergent perspectives, the depth of his work, highlighting the wide philosophical and psychological toolkit it offers to contemporary readers.

NOTE: Abstracts are available here following. Forewords, abbreviations, notes and reviews can be freely read. Articles can be singularly purchased in pdf digital format.
The paper volume can be bought here.